Latest breaking news articles, photos, video, blogs ... soldiers they never knew, who were killed in World War I ... and Pacific representation on governing bodies for sports ...www.nzherald.co.nz - Cached - More from this site 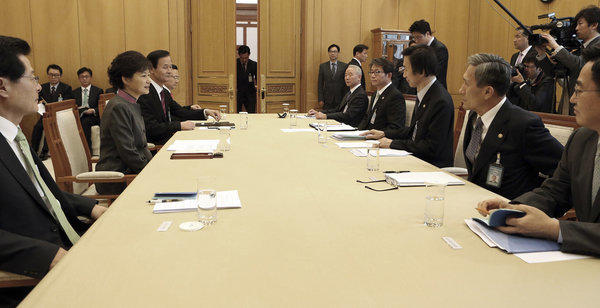 "SEOUL -- South Korea said Friday it would pull its remaining workers from an industrial complex run jointly with North Korea after Pyongyang refused an offer to begin talks. Located just north of the demilitarized zone between the two countries, the Kaesong complex has been idle for more than two weeks, since North Korea blocked access to the site and withdrew its employees. South Korea had given the North until Friday to answer its call to begin negotiations, saying more than 170 South Korean workers who remain at the complex were running short on food and medical supplies. When officials in the North Korean capital, Pyongyang, turned down the offer, calling it insincere, the government in Seoul made the "unavoidable decision" to pull out its nationals for their safety, South Korean Unification Minister Ryoo Kihl-jae said in televised remarks Friday."

"MOSCOW, April 26 (Reuters) - A Russian court refused to release from prison one of two jailed members of the Pussy Riot punk band so that she can look after her young daughter. The court on Friday rejected Nadezhda Tolokonnikova's appeal for parole eight months after she was handed a two-year prison sentence for the band's performance of a "punk prayer" in Moscow's main Russian Orthodox cathedral. Tolokonnikova, 23, has been serving her sentence for "hooliganism motivated by religious hatred" in a prison colony in central Russia, about 550 km (350 miles) southeast of Moscow."

"President Barack Obama has lauded George W Bush for facing a storm of terrorism head on, putting ideology aside as his predecessor opened a new library that makes his case for history. With all US living presidents at his side, Mr Bush admitted some of the choices he made were unpopular, but said he had always been driven to spread freedom, in two tumultuous terms marked by the Iraq War and the September 11 attacks. World leaders who were closest to Mr Bush were also in Dallas to honour their former comrade-in-arms, including former Prime Minister, John Howard, who was in Washington on September 11, and Britain's Tony Blair. President Obama, who had flagrant foreign and economic policy disagreements with Mr Bush, chose to dwell on the qualities of the 43rd president's character, and spoke of a special bond with one of the few men alive who sat in the Oval Office."

"SAN JUAN, Puerto Rico — The fishing trip off the rugged north coast of St. Lucia was supposed to last all day, but about four hours into the journey, the boat's electric system crackled and popped. Dan Suski, a 30-year-old business owner and information technology expert from San Francisco, had been wrestling a 200-pound marlin in rough seas with help from his sister, Kate Suski, a 39-year-old architect from Seattle. It was around noon April 21."