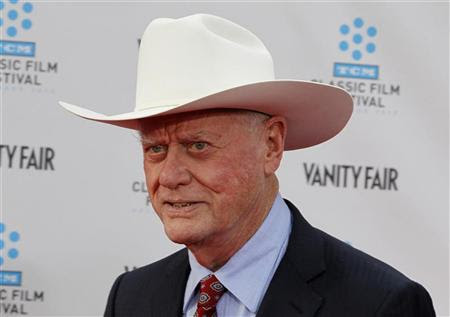 "(Reuters) - Larry Hagman, who created one of American television's most supreme villains in the conniving, amoral oilman J.R. Ewing of "Dallas," died on Friday, the Dallas Morning News reported. He was 81.
Hagman died at a Dallas hospital of complications from his battle with throat cancer, the newspaper said, quoting a statement from his family. He had suffered from liver cancer and cirrhosis of the liver in the 1990s after decades of drinking.

Hagman's mother was stage and movie star Mary Martin and he became a star himself in 1965 on "I Dream of Jeannie," a popular television sitcom in which he played Major Anthony Nelson, an astronaut who discovers a beautiful genie in a bottle.
"Dallas," which made its premiere on the CBS network in 1978, made Hagman a superstar. The show quickly became one of the network's top-rated programs, built an international following and inspired a spin-off, imitators and a revival in 2012.
"Dallas" was the night-time soap-opera story of a Texas family, fabulously wealthy from oil and cattle, and its plot brimmed with back-stabbing, double-dealing, family feuds, violence, adultery and other bad behavior."