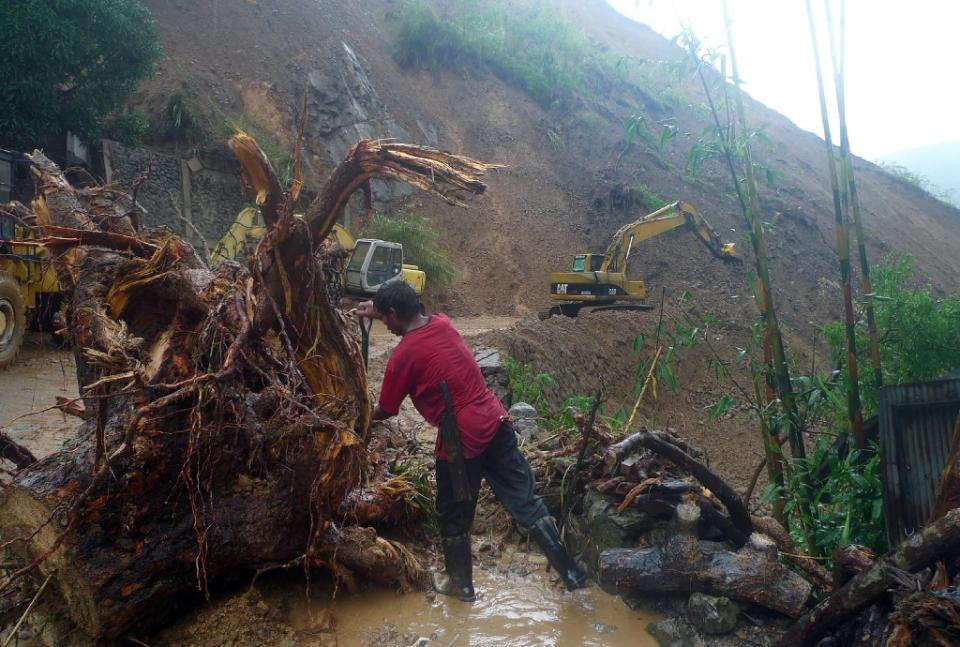 Nine people died in Mountain Province and Benguet in the northern highlands after their houses were buried in rocks and mud. A man was killed in nearby Ilocos Norte province after he was hit by a falling tree, the national disaster council said in a report.
Three people were reported missing in flooded areas while seven others were injured. Close to 13,000 people had been evacuated by nightfall, the report said.
Typhoon Goni was 130 kilometres northeast of the Batanes island chain on Saturday evening, with winds of up to 185kph (115mph), according to the state weather bureau.
In the northern province of Abra, two straight days of heavy rains caused a major river to overflow, governor Eustaquio Bersamin said.
"The Abra river has turned into an ocean," Bersamin told DZMM radio. 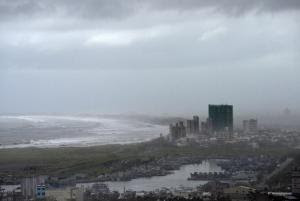 A view of the Wushih harbor in Yilan as typhoon Goni approaches eastern Taiwan, pictured on August 2 …
"The rains were much stronger than we expected," he said.
Thirteen domestic flights were cancelled on Saturday, the disaster council said.
The storm is the ninth out of an average of 20 that hit the Philippines each year and is now heading to Taiwan, the weather bureau said.
Taiwan has evacuated people from outlying islands and troops are on standby for disaster relief as it takes precautions against heavy rains expected this weekend.
Towering waves crashed against the island's eastern coast Saturday morning, although people were still on the beach in the southern region of Kenting. 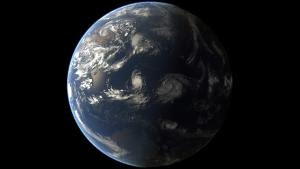 A composite image of Tropical Cyclones Goni and Atsani, pictured over the Pacific on August 17, 2015 …
- Tourists evacuated -
While the chance of Goni making landfall in Taiwan has diminished, the typhoon will bring heavy rains to most of the island Saturday and Sunday, with mountainous areas in eastern Hualien and Yilan counties expected to see torrential downpours.
Areas at risk included the hot spring town of Wulai that was devastated by Typhoon Soudelor just two weeks ago. The popular tourist destination is still struggling to repair roads damaged by mudslides and the town remains cut off from regular water and power supplies.
Wulai residents piled large sandbags along the river to prevent flooding from the expected rains and local officials said may evacuate residents from at-risk areas.
At least 1,700 tourists have already been evacuated from Taiwan's outlying Green and Orchid islands. Offices and schools have been closed there since Friday. Some ferry services and domestic flights have been cancelled, but international flights have yet to be affected.
China's National Meteorological Center has forecast Goni will not make landfall in the country, although the lowest level typhoon alert has been issued.
The eastern province of Fujian, which faces Taiwan across a strait, has evacuated nearly 5,000 people involved in the fishing industry from coastal areas while 10,490 boats have returned to port to avoid impact from the typhoon.
Typhoon Soudelor killed at least 21 people in China after making landfall in Fujian earlier this month.
In Japan, airlines announced possible flight delays and cancellations as Goni and another strong typhoon, Atsani, neared.
Atsani was expected to approach the Ogasawara island chain, some 1,000 kilometres south of Tokyo, on Saturday, with winds of up to 252kph, according to the Japanese meteorological agency.
Goni was forecast to approach the Sakishima island chain in the south on Sunday, it said.