"For years, large clinical trials have treated people with epilepsy using so-called deep-brain stimulation: surgically implanted electrodes that can detect a seizure and stop it with an electrical jolt. The technology leads to a 69 percent reduction in seizures after five years, according to the latest results. Tracy Cui, a biomedical engineer at the University of Pittsburgh, hopes to improve upon that statistic. Her group has designed an electrode that would deliver both an electrical pulse and antiseizure medication. "We know where we want to apply the drug," Cui says, "so you would not need a lot of it." To build the device, Cui's team immersed a metal electrode in a solution containing two key ingredients: a molecule called a monomer and the drug CNQX. Zapping the solution with electricity causes the monomers to link together and form a long chain called a polymer. Because the polymer is positively charged, it attracts the negatively charged CNQX, leaving the engineers with their target product: an electrode coated in a film that's infused with the drug. The researchers then placed the electrodes in a petri dish with rat neurons. Another zap of electricity disrupted the electrostatic attraction in the film, causing the polymer to release its pharmacological payload—and nearby cells to quiet their erratic firing patterns. Cui says her team has successfully repeated the experiment in living rats. Next, she'd like to test the electrodes in epileptic rats and then begin the long process of regulatory approval for human use. The body's blood-brain barrier protects the organ from everything but the smallest molecules, rendering most drugs ineffective. As a result, this drug-​delivery mechanism could treat other brain disorders, Cui says. The electrodes can be loaded with any kind of small drug—like dopamine or painkillers— making it useful for treating Parkinson's disease, chronic pain, or even drug addiction. " 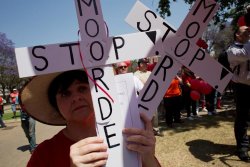 Pretoria (AFP) - A group of white South Africans marched Thursday to protest murders of farmers and the "oppression" they say whites suffer, despite remaining the country's most privileged section of society 19 years after the arrival of all-race democracy.
AFP27 mins ago
SaveMore like thisRemove