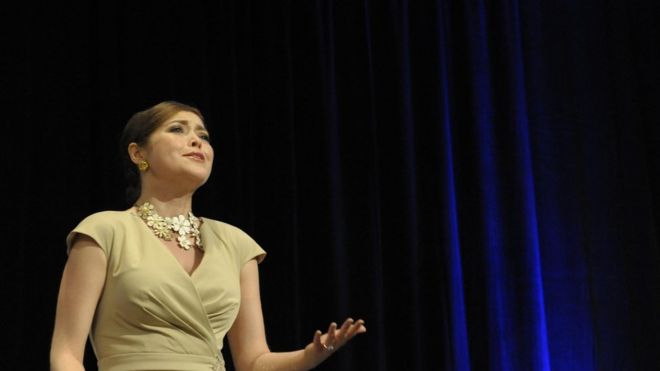 Charity "Sunshine" Tillemann-Dick, a venerated American opera singer who survived two double lung transplants, has died at age 35.
Tillemann-Dick was diagnosed with pulmonary hypertension in 2004, forcing her to undergo two emergency lung transplants needed to save her life.

Despite her illness Tillemann-Dick pursued a renowned career, performing her soprano work across the world.
Her family announced her death on her Facebook page on Wednesday.
"This morning, life's curtain closed on one of its consummate heroines," the post said.
"Our beloved Charity passed peacefully with her husband, mother, and siblings at her side and sunshine on her face."
A cause of death was not immediately clear.
Tillemann-Dick lived in Baltimore, Maryland with her husband Yonatan Doron.
She performed across the US, Europe and Asia. Her opera roles included Titania in A Midsummer's Night Dream, Gilda in Rigoletto and Violetta in La Traviata.
The singer took the stage at storied theatres worldwide, including the Rose Theater at Lincoln Center in New York, the John F Kennedy Center in Washington DC and the Palace of the Arts in Budapest. 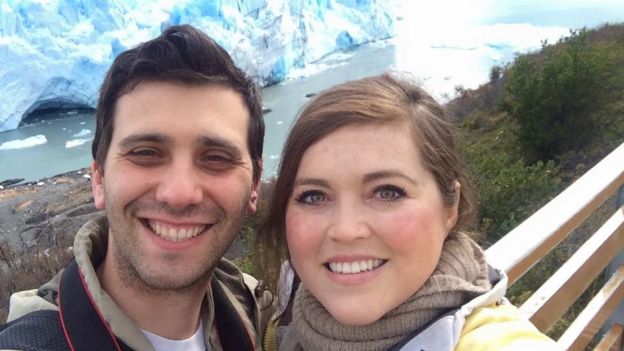 Tillmann-Dick was raised in Denver, Colorado, growing up in a Mormon-Jewish family alongside her 10 siblings.
Though she loved to sing from an early age, cherishing family trips to the symphony and opera, Tillemann-Dick initially thought she might pursue a career in politics.
She would be following in the footsteps of her grandfather, Tom Lantos, a Holocaust survivor who served as a Democrat in the House of Representatives for almost 30 years, and an older brother, Tomicah Tillemann, who worked as a speech writer for Hillary Clinton.
"That's kind of our family trade I suppose," Tillemann-Dick said of politics in an interview with BBC World Service in 2013.
But after graduating from college and spending time on a few political campaigns, she made the choice to return to music.
"I decided I could never forgive myself if I didn't try my hand at music", she told the BBC.
Tillemann-Dick began an intensive training programme at the renowned Franz Liszt Academy of Music in Budapest, Hungary.

At age 20 she was diagnosed with idiopathic pulmonary hypertension, a rare disease marked by extreme pressure on the heart with no apparent cause.
The condition had caused Tillemann-Dick's heart to swell three and a half times beyond its normal size.
The diagnosis provided an explanation for her recent fainting spells and shortness of breath, and carried a life expectancy of two to five years.
Tillemann-Dick had said that one of her doctors told her she should stop singing for her condition.
Hoping to avoid a lung transplant, Tillemann-Dick was prescribed Flolan, a liquid medication delivered directly to the heart through a tube in her chest. 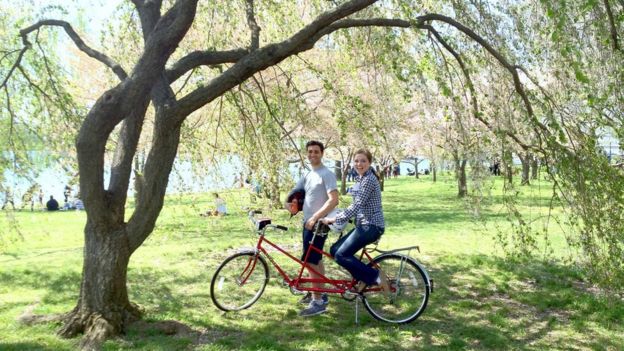 The pump, along with the necessary ice packs and auxiliary equipment, weighed about 4lbs (2kg), Tillemann-Dick told the BBC.
Not wanting to draw attention to her condition as she continued to audition and perform, Tillemann-Dick said she would strap her medication to her thigh.
"Sopranos are unpredictable enough, without critical illness," she said,
In 2009, five years after the initial diagnosis, Tillemann-Dick received her first double lung transplant at the Cleveland Clinic in Ohio.
Though the transplant was life-saving, Tilleman-Dick said she was very concerned about the surgery, particularly its impact on her voice.
"I had spent a lifetime training my body and my lungs and my voice to work in sync and I knew I would lose all of that," she told the BBC.
The brutal surgery put Tillemann-Dick in a coma for over a month, unable to breathe on her own for almost two months.
Eating, walking and talking came next before Tillemann-Dick finally tried to sing again.
The first song she tried, she said, was Smile - made famous by Nat King Cole.


A career beset by illness

The average lung transplant lasts for about five years, but Tillemann-Dick's body began to reject the transplanted organs just months after surgery.
As she awaited another donor match, doctors told her family that Tillemann-Dick was unlikely to survive, according to the Washington Post.
But as she waited, Tillemann-Dick continued to sing.
In 2011, still without functioning lungs, she debuted at Lincoln Center's Rose Theater. As she sang, Tilleman-Dick had an oxygen tank and wheelchair waiting in the wings.
"I could barely breathe but I could still sing", she told the BBC. "It was a miracle."
In January 2012, she underwent her second double-lung transplant, from a middle-aged Honduran American woman.
Tillemann-Dick became close friends with her donor's daughter, Esperanza Tufani. 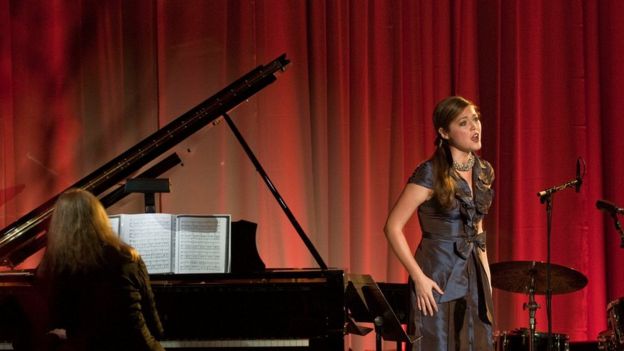 Apparently undeterred by her illness, Tillemann-Dick continued to pursue her career, singing with a new pair of lungs.
Her debut album, American Grace, reached no 1 on Billboard's traditional classical charts upon its release in 2014.
Tillemann-Dick's dedication to music was perhaps matched by her advocacy work.
She was a national spokeswoman for the Pulmonary Hypertension Association, working to raise awareness, increase federal research funding and promote preventative medicine.
Tillemann-Dick also shared her inspiring story with audiences across the US, including at numerous TED Talks.
"It was so many miracles that paved this most unexpected of paths", she said to the BBC.
In 2015, Tillemann-Dick was confronted with another health problem.
She was diagnosed with a rare and aggressive skin cancer, thought to be a result of the anti-rejection drugs she had taken for her lungs.
Treatment required chemotherapy, radiation and surgery, including a particular procedure that required cutting a nerve on her face, affecting muscle movement on the right side of her mouth, the Washington Post reported.
"Life is full of death. Music, full of sorrow", Tillemann-Dick wrote in her 2017 book, The Encore: A Memoir in Three Acts.
"Great artists have always amplified both."